What’s Wrong With My Dog, He Loves To Eat Poop! Children will often do crazy things because they saw their friends do them first. But once is usually enough. They won’t jump out of a tree or put their fingers in a candle flame after the first painful experience. Dogs, however, will return to eating dung again and again. Most experts have had to conclude that there’s more at work than simple imitation. There are times when that includes imitating their least desirable behavior – eating dung. But they do, so there has to be something about it that they like.

This isn’t all that surprising. Dogs have always been scavengers. They’ll eat roadkill as readily as their suppers. Old trash, pond muck, and dead sparrows on the lawn are no less appetizing. Dogs start getting hungry whenever they sniff something with a pungent smell, and dung certainly does smell. 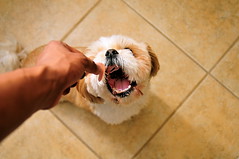 Not all dung tastes the same, of course. Dogs seem to have different preferences. Some are attracted to the stools of deer, cows, or horses. Others will eat the stools of other dogs. And a great many dogs are attracted to cat droppings, possibly because cat foods are very high in protein and the dogs are going after undigested nutrients.

Dogs, no less than children, crave attention. And they do whatever it takes to get it, including things they know you hate. This probably explains why some dogs only eat dung when their owners are around to watch. It’s probably the equivalent of a 6-year-old saying a dirty word and then watching for his parents’ reaction. “Look at me,” the dog is saying.

Boredom has something to do with it too. Dogs entertain themselves by putting things in their mouths. When not much is happening, they often nose around the yard, picking up sticks and putting them down, even mouthing rocks on occasion. Since they aren’t offended by the smell or taste of dung, it’s just another thing for them to pick up, play with, and explore.

Dogs occasionally eat so much dung that they get sick to their stomachs. For the most part,
however, it’s not likely to make them sick – although they may get worms from eating the stools of an infected animal. Their digestive tracts are very forgiving.

The people who live with dogs, however, are less forgiving. For one thing, it’s an ugly sight that no one wants to watch. There’s also the fact that dogs who eat dung have heart-stopping bad breath. It takes some serious devotion to get past that!

Dung-Eating Tip: Veterinarians sometimes recommend adding garlic, canned pumpkin, or Accent meat tenderizer to a dung-eating dog’s food. Assuming that it’s his own dung that he’s attracted do, these ingredients may give it a taste he dislikes – although it’s hard to imagine that anything could make it taste worse than it already does. This isn’t a perfect solution, but it does work for some dogs.

Dogs can contract worms so easily, all they need to actually do is inhale the eggs and they can be infested with worms. So keeping a dog from eating poop is important for hygiene and health reasons. The short answer is yes: dogs can get worms from eating poop.